Sea Monsters do exist in the worlds of Dungeons and Dragons. There really be dragons here. A dungeon master needs good resources for ship combat. Advanced Dungeons and Dragons: Imgig Zu, from the first 4 issues, is the ruler of a group of extraplanar beings who once seduced the goddess Selune to obtain access to the world. Defeated and sealed off, Imgig Zu managed to escape and later murders the mage who helped save Selune while spitefully crippling his son's hands and leaving him alive.

Having been around, is the and for the. It is thus no surprise that inhabiting the worlds are some.!The Tabletop Games., Prince of the Undead, is a demon prince who became a. With horrific, blasphemous rites, even by the standards of evil gods, Orcus seeks to convert all that lives to his undead slaves. 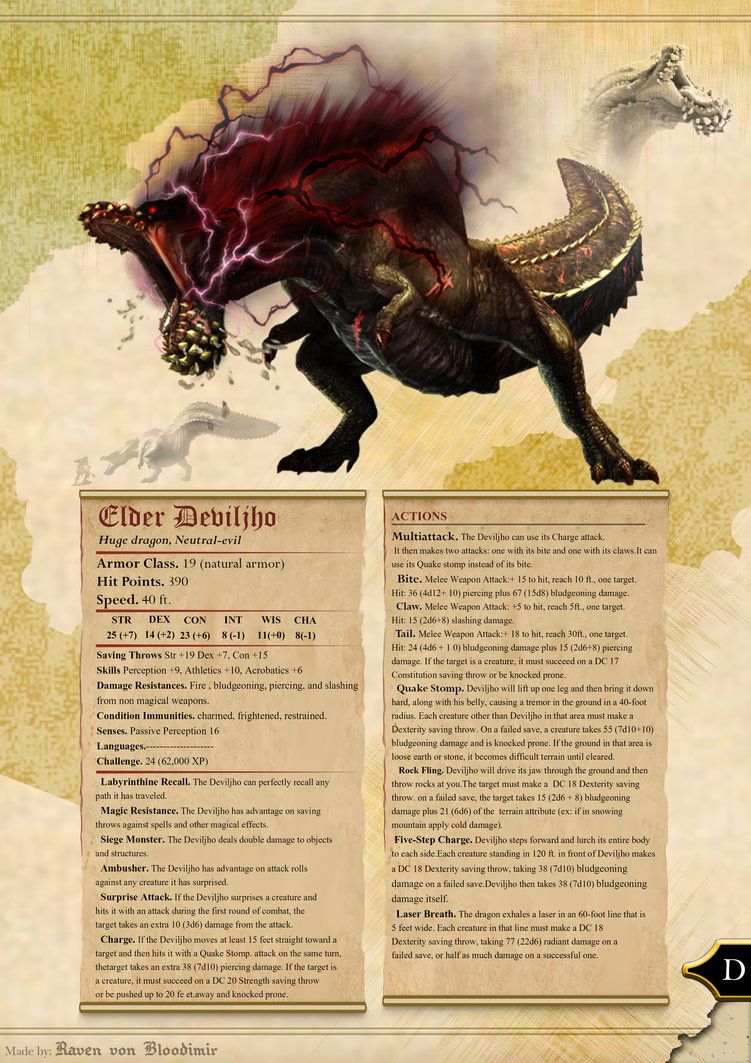 Constantly attempting to wipe out living regions, Orcus later achieved godhood and expanded his influence, before being murdered by another god. Returning as Tenebrous in, Orcus went on a before inspiring massive catastrophes across the planes. Seeking to punish life itself for his death, Orcus wiped out a world with a plague and kept the souls in tortured anguish, intending on massacring the City of Sigil and converting its inhabitants into an undead army to steadily. Returning to his demonic status, Orcus continuously seeks his lost godhood, even rerouting souls from his nemesis the Raven Queen to him so he may twist them into his own slaves. Seeking to usurp the Raven Queen's divinity, Orcus's ultimate goal is to enslave and convert every soul until he remains the only deity, with all life ceasing to exist save as his mutilated hordes of undead.

is passed over to succeed the noble Pescheour family for his noble brother Alain due to his own personal selfishness and cruelty. Garloth later returns, before turning everyone in the castle into horrible monsters, erasing their identities. To obtain the family treasure, the Stone of Corbinet, the linchpin of the world itself, Garloth hires adventurers to kill the monsters, without informing them of said monsters being innocent people Garloth had mutated. Upon realizing the theft of the stone has led to a dawning apocalypse, with demons and devils running rampant and everyone on the world about to die, Garloth decides to simply flee for a new world and to not return the stone to save the current one. A man of unbelievable and, Garloth decides if he cannot be king, then the entire world can burn for all he cares.

As your party of bold adventurers rounds the corner of an ominous, trap-filled lair, there’s a good chance your characters will come face to face with a horrible monster, the likes of which they've never seen. However, you, the player, are probably familiar with the beast in question.Many of the creatures in are iconic monsters from folklore and myth, yet when you’re staring one down, armed with a d20 and whatever magic items you managed to get your hands on, the monsters feel pretty unique. That's no accident.Before any entry in the Monster Manual gets a Challenge Rating, the creators of Dungeons & Dragons are faced with the challenge of making sure that these well-known creatures feel like a part of the D&D world, rather than like guest stars. That’s quite a task, given how many of originated from folklore.“ D&D, in terms of its inspiration from folklore, has cast a very wide net,” Mike Mearls, D&D’s franchise creative director, tells SYFY WIRE.

Mearls isn’t sure exactly how many Fifth Edition monsters are from folklore — like hags, vampires, and the titular dragons — and how many are, like the many-eyed Beholder.“I wouldn’t be surprised if it’s a 50-50 split, maybe even like two-thirds monsters from folklore,” he guesses, adding that the many demons and devils are original creations, which probably goes a long way toward evening out the tally. Credit: Wizards of the CoastNot every monster from folklore can make the cut, Mearls says.“We used to have a joke that the Monster Manual is like this nightclub, and we were the bouncers at the door,” he recalls. “For some monsters, we’d part the velvet rope and let them in, and others we would tell them to take a hike. They couldn’t get into the club, at least not on opening night.”Once Mearls and the other creatives have determined which monsters are worthy of making the Manual — by virtue of how iconic, interesting, or unique they are — then it’s time to add a stat block to the story.“If you look at folklore, you think of a story or a fairytale — Rumpelstiltskin pops to mind — whoever first heard that story didn’t have to think, ‘Okay, so I’ve got to solve for how the princess deals with him,’” Mearls says. “‘What about a 10th-level paladin?

How would he handle this guy?’”For many well-known monsters, the key is to lean into the ubiquity of the monster. Take a hag, for example. Everybody knows the basics of the evil witch who looms over a cauldron and wants to steal away children.

At the same time, though, the idea of a hag is so pervasive that there are different interpretations of the monster around the world. The Monster Manual splits the difference, with the and abilities of hags echoing the broad-stroke commonalities of folklore, while at the same time having various subcategories of Hag with a little more personality.

Credit: Wizards of the Coast“A lot of the creatures that are really iconic in folklore tend to have multiple expressions in D&D,” Mearls says, pointing to Dragons as perhaps the ultimate example. Credit: Wizards of the Coast/Summit Entertainment“Often you’ll find things like vampires, werewolves, mummies, and zombies show up in a lot of contemporary entertainment. You look at the design in D&D, and those tend to be pretty straightforward, usually going back to abilities you’ve seen in mythology,” he continues.Unlike some of D&D’s original monsters, like the brain-sucking Mind Flayers, there aren’t paragraphs of backstory accompanying the zombie entry.

It’s pretty bare-bones, much like the walking dead themselves, instead leaving specifics up to the Dungeon Masters’ imagination rather than locking the “canon” D&D zombie to any specific iteration.Still, there are some monsters where Mearls and his team double down on the specifics of a creature or folktale rather than embrace broad imagining. Medusa, for instance. “In game design terms, had one trick, and everyone knew what it was, so you had to lean into that,” Mearls says. The other specifics of the Greek myth don’t come into play in D&D, which has turned Medusa from a singular character into an entire monstrous race, defined by serpentine hair and a petrifying gaze. The Sphinx is another such example.“Everybody knows about the Sphinx, and a lot of the times the riddle of the Sphinx,” Mearls says. “It’s a bit more specific than, say, a dragon or a hag.”. Credit: Moh hakem/Creative Commons/Wizards of the CoastThe Sphinx you’ll find in the Monster Manual does have quite a bit of lore alongside the stats, but it’s lore that places the trait people most associate with Sphinxes — that they’re riddle-loving guardians — and uses that to create a unique but still-flexible backstory.

The important added bonus of this approach, which Mearls calls “playing in the shallow end of the pool,” is that it doesn’t appropriate too much, especially when drawing on non-Western folklore or myth.“We’re taking something from a culture that we are not native to, and we do not want to turn it into a caricature,” Mearls says, admitting that there are of course going to be some missteps despite their best efforts. “We want to be inspired by it, but then really root it in D&D to make sure that we’re not being disrespectful, that we’re not appropriating anything.”So, the next time that your Cleric fails a stealth check and a familiar beast charges at you, know that its journey from Grimms' Fairy Tales to the Monster Manual involved lots of deliberate and distinct changes.